Review; An Ember in the Ashes by Sabaa Tahir 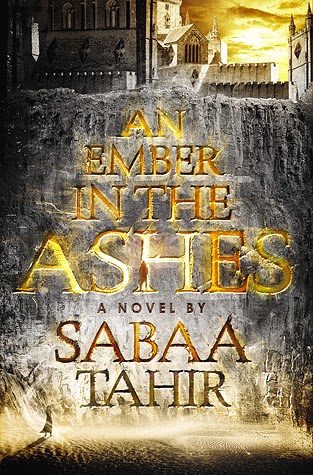 Summary; Laia is a slave. Elias is a soldier. Neither is free.
Under the Martial Empire, defiance is met with death. Those who do not vow their blood and bodies to the Emperor risk the execution of their loved ones and the destruction of all they hold dear. It is in this brutal world, inspired by ancient Rome, that Laia lives with her grandparents and older brother. The family ekes out an existence in the Empire’s impoverished backstreets. They do not challenge the Empire. They’ve seen what happens to those who do. But when Laia’s brother is arrested for treason, Laia is forced to make a decision. In exchange for help from rebels who promise to rescue her brother, she will risk her life to spy for them from within the Empire’s greatest military academy. There, Laia meets Elias, the school’s finest soldier—and secretly, its most unwilling. Elias wants only to be free of the tyranny he’s being trained to enforce. He and Laia will soon realize that their destinies are intertwined—and that their choices will change the fate of the Empire itself.

This book was pretty badass. Also, that cover? Totally gorgeous! So in love with it! There was a ton of hype surrounding this book before it had even been released, just from people who had received ARC copies so I was so stoked when I won a giveaway for an ARC copy, thank you Chapters Indigo for the giveaway!

Like I said, this book was pretty badass! It's told in a world inspired by ancient Rome called the Empire. The world is pretty brutal and harsh. Laia as a slave, she was subjected to so many harsh and cruel things, I really felt for her but I loved that it didn't break her, it only made her stronger and more determined to find her brother and get him out of wherever the hell he is.

This book is told in dual perspectives, so we get to see the story told through both Laia and Elias! I really loved that we got to see this world from two sides, Elias as a solider to the Empire and Laia, a slave to the Empire, but both against it. I can't even say whose POV I enjoyed more because I really liked reading both!

I absolutely loved Sabaa Tahir's writing. It was very beautiful and captivating. I wouldn't say this book was very fast paced, but the writing is just so beautiful it makes you want to read slower so you can fully immerse yourself into it and take it all in. The world she created was so fascinating and her writing just made it all the more real to me.

One of the issues I had with this book was the complicated romance. I wasn't a huge fan of this love-square. I really don't like how many YA novels have love-triangles and the fact that this book had a love-square was slightly disappointing. I probably would have even been able to get past it if the romance hadn't been so overpowering. Plus, the kind of love-triangle in here is one of my absolute least favourites and it was the most overpowering so I really couldn't get past it and be fine with it.