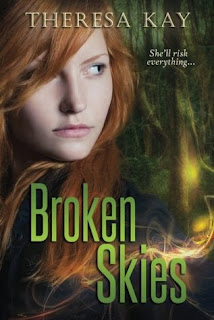 Summary; Thirty years ago, civilization collapsed. Few survived.
Ten years ago, the aliens arrived…and stayed.
One year ago, I killed two men and went a little crazy.
Today, the aliens took my brother and I will do anything to get him back.In seventeen-year-old Jax Mitchell's world, humans are nearly extinct and alien settlers have arrived.Until recently, the E’rikon have remained segregated in their city and ignored the few humans who have tried to engage them… but now they have taken Jax’s brother. To rescue him, she forms an uneasy alliance with a teenage E’rikon left stranded in the woods. She agrees to guide him to the city if he sneaks her past the human-proof barrier. Too bad it’s not that simple.Jax, who cannot stand to be touched, finds that she’s drawn to the alien boy with bright green hair and jewel-like scales on his back. And he’s equally affected by her, the courageous redhead with haunted eyes. But she doesn’t know the alien’s true motives and he has no idea that she is much more than she seems.With the aliens and the humans at odds, the connection forming between the two teens has consequences. What started off as a rescue mission sets a chain of events in motion which threatens not only the remaining humans and the growing alien society, but Earth itself.

Broken Skies is about a girl named Jax, a fiery red-head who lives with her twin brother Jace at a camp after an event that killed 90% of the worlds population. Girls are shipped off to breeding camps since after this event it's been hard for women to conceive, and aliens have dropped down to visit. And try to take over the world. And also steal Jax's twin, Jace.

Jax, our main character, I really enjoyed reading from her point of view. She was sarcastic, fiery but also vulnerable and caring. I loved the relationship she had with her twin, and I loved that Theresa would add in special moments of Jax and Jace, so even though Jace wasn't physically there, you still felt that connection to their relationship. Lir, the love interest and also alien who helps Jax get into his city where they're holding her twin, I also loved. I had my moments with him, where I thought he was being a total idiot, but overall I loved him and he was sometimes just so sweet. The relationship between Lir and Jax was so entertaining and fun, I really enjoyed it!

The plot was very fast paced, which I enjoyed! The book in general was fast paced, and so entertaining I read it in no time! I just kept wanting to know more, read more about Lir and Jax! I love alien books and this one is no different!

I would recommend this to fans of Twilight and The Lux series! It was entertaining, funny, fast paced and had a great romance! I absolutely can't wait to get my hands on the sequel, Fractured Suns!
Posted by EllyBelly at 3:08 PM