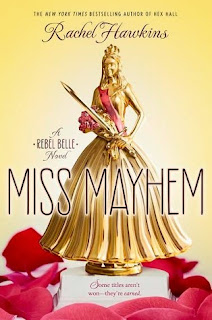 Synopsis; Life is almost back to normal for Harper Price. The Ephors have been silent after their deadly attack at Cotillion months ago, and her best friend, Bee, has returned after a mysterious disappearance. Now Harper can focus on the important things in life: school, canoodling with David (her nemesis-turned-ward-slash-boyfie), and even competing in the Miss Pine Grove pageant.

Unfortunately, supernatural chores are never done. The Ephors have decided they’d rather train David than kill him. The catch: Harper has to come along for the ride, but she can’t stay David’s Paladin unless she undergoes an ancient trial that will either kill her . . . or make her more powerful than ever.

Miss Mayhem is the sequel to Rebel Belle and what I loved most about the first book was that it was fast paced and fun! I'm happy to say this one maintained that same fast pace and fun quality to it!

Unfortunately that's about all I can say when I think of this book. It was fun and fast paced, but the world development isn't the greatest, neither is the character development. I was hoping in the second book I'd be able to connect more to Harper, the main character, but unfortunately I still don't connect with her.

This sequel was kind of centred around just one thing, but I feel like it was so dragged out and so anticlimactic in the end, and it could have been made to be so much more action packed instead of the pointless drama that kept being thrown in throughout the book.

Overall, this sequel was fast paced and fun just like the first, but it was way too short for anything really interesting or exciting to happen. It was just one of those disappointing second novels in a series, but I'm hoping in the third will make up for this one!