Review; The Uninvited by Cat Winters 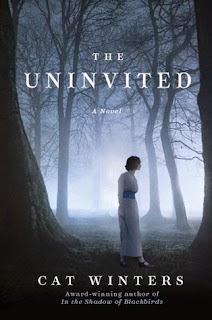 Summary: Twenty-five year old Ivy Rowan rises from her bed after being struck by the flu, only to discover the world has been torn apart in just a few short days.
But Ivy’s life-long gift—or curse—remains. For she sees the uninvited ones—ghosts of loved ones who appear to her, unasked, unwelcomed, for they always herald impending death. On that October evening in 1918 she sees the spirit of her grandmother, rocking in her mother’s chair. An hour later, she learns her younger brother and father have killed a young German out of retaliation for the death of Ivy’s older brother Billy in the Great War.Horrified, she leaves home, to discover the flu has caused utter panic and the rules governing society have broken down. Ivy is drawn into this new world of jazz, passion, and freedom, where people live for the day, because they could be stricken by nightfall. But as her ‘uninvited guests’ begin to appear to her more often, she knows her life will be torn apart once more, but Ivy has no inkling of the other-worldly revelations about to unfold.

Every time I read a book by Cat Winters, I go into it thinking 'yes, I'm sooo ready for a nice historical during World War I!' and I always come out with an emotional kick to my feels. She writes historical so realistic and she holds nothing back, she doesn't glorify what the world was like in 1918 and I so love that.

This book had an amazing setting; America, 1918-racism, illness, jazz music. It's a time when young men are being sent to their deaths in war and everyone is also fighting against the epidemic of the Spanish Influenza. Death was everywhere.

"The world's about to end. I can feel it in the marrow of my bones."

When Ivy's father and brother murder a German man, Ivy flees and tries to rid herself of the guilt she feels by approaching his brother, Daniel. From there, a relationship develops between them, where they both connect through their own pain and through the jazz music that plays across the street.

The only thing is this book didn't have as much of a supernatural aspect as I was expecting. The synopsis leads you to believe the story is mostly about how Ivy can see dead spirits but that's really more in the background. The story is definitely more fixated on the war and the Spanish Influenza and how it impacted people but for me that wasn't a problem, although I wish her seeing spirits had been touched on a bit more!

This book was full of so many things. Cat Winter's writing is beautiful and I love the way she can describe the setting. It had me completely sucked in. This book was painfully eye opening and honest, but beautiful all at the same time. I will definitely be eagerly awaiting Cat Winters next books!
Posted by EllyBelly at 9:55 AM