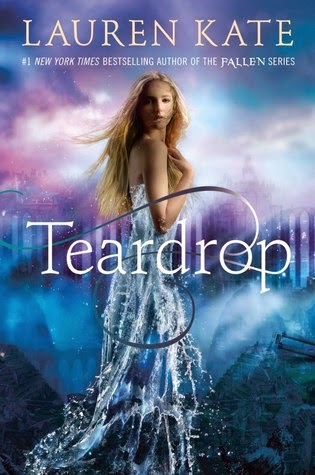 Goodreads Summary:  Never, ever cry... Seventeen-year-old Eureka won't let anyone close enough to feel her pain. After her mother was killed in a freak accident, the things she used to love hold no meaning. She wants to escape, but one thing holds her back: Ander, the boy who is everywhere she goes, whose turquoise eyes are like the ocean. And then Eureka uncovers an ancient tale of romance and heartbreak, about a girl who cried an entire continent into the sea. Suddenly her mother's death and Ander's appearance seem connected, and her life takes on dark undercurrents that don't make sense. Can everything you love be washed away?

When I was growing up, I was a huge fan of Atlantis and the story of it! I used to watch the movie Atlantis all the time and was so excited to read this story because it's based off the tale of Atlantis. I'm also a fan of Lauren Kate's Fallen series, I know a lot of people didn't quite enjoy them but I really did like that series so was excited to read this one. This book just sounded like it was going to be so beautiful but I'm sad to say it didn't meet my expectations.

At the beginning of this book I liked the main character, Eureka, and I thought as I got further into the book that I'd be able to connect with her, but somewhere along the way I just found myself getting annoyed and frustrated with her. I don't know what happened but she kept making impulsive decisions, then her decisions and the reason behind why she made them were never explained.

I'm not a huge fan of love triangles in general but the love triangle in this book was just straight annoying and frustrating. It was really unrealistic and I had to restrain myself from rolling my eyes. We didn't learn too much about Ander, he honestly wasn't even in the book very often. He'd come in randomly every few pages then disappear again. I'm not even sure how I feel about him other than he's super sweet, but we didn't learn too much about him.

Brooks, Eureka's best friend, was a total dick to her at many points in the book and she never stood up for herself which was also frustrating. He would be an asshole to her then give some half-ass stupid apology and she would instantly forgive him. Uhm, what? No, stick up for yourself! Please! I honestly couldn't really feel any chemistry between her and Ander or Brooks, the romance was rushed and came out of nowhere.

Overall, I did enjoy the first 150 pages or so, but somewhere after that the story just took a totally different turn and I started to dislike it. It was pretty slow and I found myself dragging through it. I think the plot is really interesting and had a lot of potential, but it just didn't work well for me.

Posted by EllyBelly at 2:35 PM