Review; Side Effects May Vary by Julie Murphy 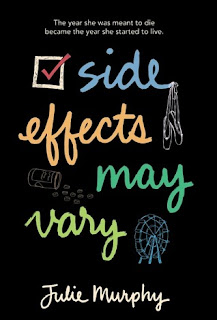 Synopsis: What if you'd been living your life as if you were dying—only to find out that you had your whole future ahead of you?
When sixteen-year-old Alice is diagnosed with leukemia, her prognosis is grim. To maximize the time she does have, she vows to spend her final months righting wrongs—however she sees fit. She convinces her friend Harvey, who she knows has always had feelings for her, to help her with a crazy bucket list that's as much about revenge (humiliating her ex-boyfriend and getting back at her archnemesis) as it is about hope (doing something unexpectedly kind for a stranger). But just when Alice's scores are settled, she goes into remission.Now Alice is forced to face the consequences of all that she's said and done, as well as her true feelings for Harvey. But has she caused irreparable damage to the people around her—and to the one person who matters most?

First things first, I want to say that this book was very honest and real. It's very raw and very real, it doesn't gloss over anything or romanticize cancer or it's side effects. That being said, while I can appreciate that about the book, I did not like this book.

My main problem with this book was the main character Alice. I did not like her at all. She's so mean, such a bully and so manipulative. She was just cold and heartless, not to mention so freakin' moody. With Harvey, she'd be clinging on to him one minute and then completely ignoring him and being a complete asshole to him the next.

Overall, this book had a lot of potential, it had a great plot but poor execution and I didn't like or connect with any of the characters, which made it very hard for me to enjoy the story. I would say if you're a fan of John Green or these kinds of stories, to still give it a shot! Hopefully you'll like it more than me!