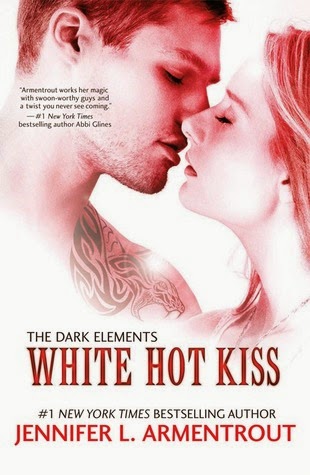 One kiss could be the last Seventeen-year-old Layla just wants to be normal. But with a kiss that kills anything with a soul, she's anything but normal. Half demon, half gargoyle, Layla has abilities no one else possesses. Raised among the Wardens—a race of gargoyles tasked with hunting demons and keeping humanity safe—Layla tries to fit in, but that means hiding her own dark side from those she loves the most. Especially Zayne, the swoon-worthy, incredibly gorgeous and completely off-limits Warden she's crushed on since forever. Then she meets Roth—a tattooed, sinfully hot demon who claims to know all her secrets. Layla knows she should stay away, but she's not sure she wants to—especially when that whole no-kissing thing isn't an issue, considering Roth has no soul. But when Layla discovers she's the reason for the violent demon uprising, trusting Roth could not only ruin her chances with Zayne…it could brand her a traitor to her family. Worse yet, it could become a one-way ticket to the end of the world.

"Free will isn't bullshit, Roth."
He stopped suddenly in front of me and our eyes locked. "Say it again."
I frowned. "Say what?"
"My name."
"Roth...?"
The dimples appeared again. "Did you know that was the first time you've used my name? I've decided I quite like hearing you say it."

I love Jennifer Armentrout's dialogue between characters. She always writes hilarious, witty banter that I just love! Roth was definitely my favorite out of the love-triangle in this book. I didn't hate Zayne, but I didn't exactly like him either. I didn't really understand Layla's feelings for him, either. It seemed to me like he kept a lot of things from her and she also kept things from him, so I didn't see why she thought she loved him. But with Roth she was able to be her whole-self, she didn't have to hide her demon half from him like she had to around Zayne. Roth understood her more and accepted both halves of her, he didn't make her hate her other half of herself. I also love Roth's snake, Bambi!

I didn't really connect with Layla or particularly like her that much. I'm used to Jennifer L. Armentrout's characters being strong, independent, sassy, take-shit-from-nobody heroines, but Layla wasn't really like that. The Warden's would disrespect her and treat her like shit and she just took it, saying in her mind they were the only family she had but in reality they're never going to accept her for who she really is, or what she really is.

I found it a little hard to get fully immersed into this story and fully get sucked into it. It took me a while longer to get through this book than it should have for me. I was kind of frustrated and annoyed by the love-triangle, but I'm not a huge fan of love-triangles in general. I felt like Layla's feelings for both Roth and Zayne would enter into the plot at unnecessary times. Her feelings for Zayne also kind of frustrated me just because I couldn't connect with her relationship with him or understand why she thought she felt so strongly about him.

I did really love the setting of this book and the world. I love Jennifer Armentrout's fast-paced writing style and learning about the history and everything behind Warden's and demons. I have never read a book about gargoyles and demons, so this was definitely new and interesting for me, I really did love it! There were a lot of crazy plot twists in this book, and a lot of crazy things just going on in general.

Oh my god, the ending of this book... I almost cried. I teared up a little. Freakin' cliffhangers! It broke my heart.

I think this book is a must read for everyone! It was fast-paced and filled with extra hot demons and gargoyles! I really enjoyed it and can't wait for the sequel, Stone Cold Touch!